Gates explains that the serpentine belt, tensioner, idler and pulleys inside the accessory belt drive system work together smoothly, to provide the drive for systems such as the power steering, alternator, air conditioning and, sometimes, the cooling system via the water pump.

At the heart of the system is the belt. It is regarded as a critical component. It drives so many different components that the failure of even one could lead to unsafe situations. Once an engine is running, the belt operates continuously.High under-bonnet temperatures plus constant flexing ultimately take their toll and over time even the best belt will wear and need replacement.

But the other belt drive components don’t last forever either. Belt tensioners, idlers, torsional vibration dampers and overrunning alternator pulleys are wear parts, not “hard parts”, as many technicians believe. The wear of these components affects the belt’s, and subsequently, the complete system’s performance.

HOW TO IDENTIFY A WORN SERPENTINE BELT?
When diagnosing serpentine belt problems, use the following troubleshooting methods to resolve the problem:

1. RANDOM CRACKING ACROSS THE RIBS

Appearance: Small yet visible cracks along the length of a rib or ribs.
Cause: Continuous exposure to high temperatures and the stress of bending around the pulleys leads to cracking. Cracks begin at the rib top and grow to the cord line. As a rule, if cracks appear 1 or 2 cm apart, 80% of the life is gone and the belt should be replaced.
Solution: Replace with a Gates Micro-V® Horizon® belt, which is engineered to withstand higher temperatures and resist cracking. 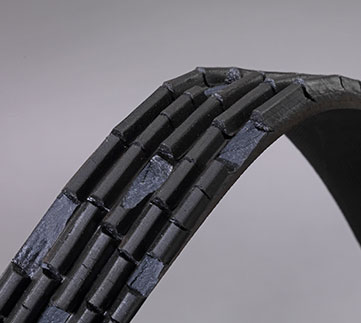 Appearance: Pieces or chunks of rubber material have come off the belt. When chunk-out has occurred, a belt can fail at any moment.
Cause: Chunk-out can happen when several cracks in one area move parallel to the cord line. Heat, age and stress are the primary contributors.
Solution: Replace with a Gates Micro-V® Horizon® belt, which is designed for greater flexibility and heat tolerance in today’s smaller engine compartments. 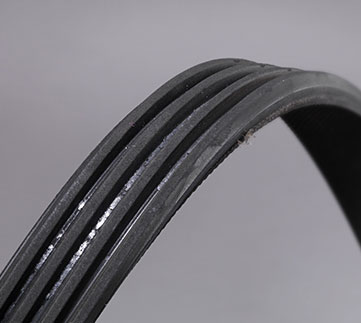 Appearance: Belt material wears off from the ribs and builds up in the belt grooves.
Cause: There are a number of causes, including misalignment, new belt on worn pulleys, lack of tension or a combination of these factors. Pilling will occur most frequently in diesel engines, but is not isolated to them.
Solution: When pilling leads to belt noise or excess belt vibration, the belt should be replaced. Make sure the new belt runs on perfect pulleys. Check the tensioner andensure proper belt tension on a properly aligned drive. 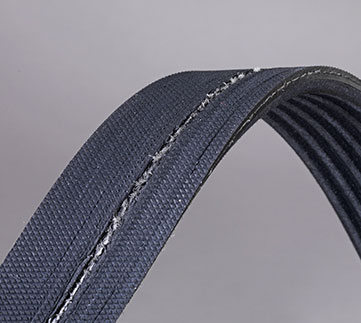 Appearance: The backside of the belt appears shiny or glazed. In advanced stages, the fabric or even the cord becomes exposed and gets damaged.
Cause: When in motion, the belt makes contact with a foreign object in its path such as a flange or bolt. This may be caused by improper belt tension or by belt flutter (vibrations) on longer span lengths between two pulleys.
Solution: Replace the belt and make sure to observe the complete tracking of the belt as it revolves around the pulleys. Check the tensioner and ensure proper belt tension. 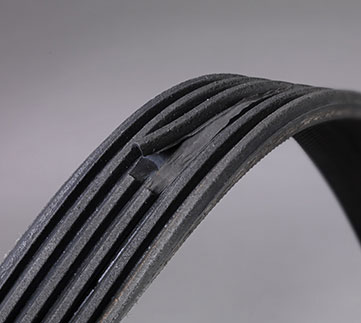 Appearance: A belt rib shears off or begins to separate from the belt base.
Cause: The belt is not correctly positioned. One of the belt ribs is placed outside the pulley groove, causing a belt rib to run without a supporting or aligning pulley groove.
Solution: The belt’s life has been severely limited, so the belt should be replaced immediately. Make sure all ribs of the replacement belt fit into the pulley grooves. Run the engine and then, with the engine off and battery disconnected, inspect the belt for proper installation. 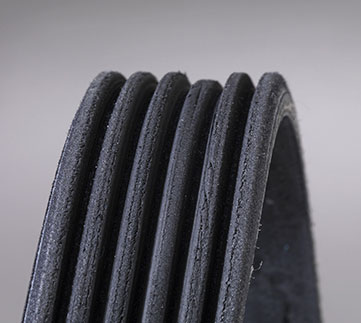 Appearance: Wear that is more severe on one rib than on the others or one rib that exhibits a different wear pattern than the others. A thumping or grinding noise may also be heard.
Cause: A foreign object – such as a pebble – in the pulley will cause uneven wear and can cut into the belt and break the tensile cords. Cars where the engine protection shield is missing are likely to have this problem.
Solution: Replace the belt and make sure the new belt runs on perfect pulleys. Install an engine protection shield. 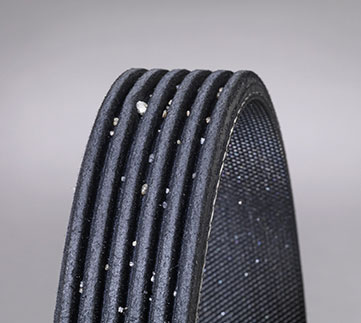 Appearance: Small pinholes are visible on the backside of the belt. Bumps may be visible and fabric around the holes can be frayed.
Cause: Granular gravel or pebble gravel is wedged between the belt groove(s) and pulley ridge(s). Cars where the engine protection shield is missing are likely to have this problem.
Solution: Check the entire drive and then replace with a Gates Micro-V® Horizon® belt, which is precision ground in the factory for a better pulley fit. Make sure the new belt runs on perfect pulleys. Install an engine protection shield.
8. DAMAGED OUTERMOST RIBS 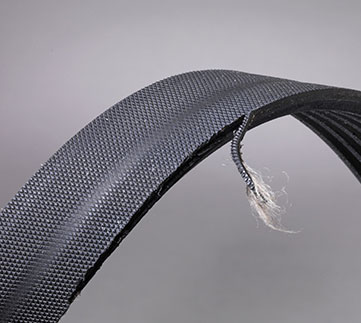 Appearance: Sidewalls of the belt may appear glazed or the edge-cord may become frayed and ribs removed. A noticeable noise may result. In severe cases, the belt can get pulled into the timing belt drive causing catastrophic engine damage.
Cause: Pulley misalignment is a common cause of premature belt failure. Misalignment forces the belt to kink or twist while running, causing premature wear.
Solution: Replace the belt and make sure to realign the pulleys. Also check that the pulleys, pulley brackets and shafts are not bent or broken. 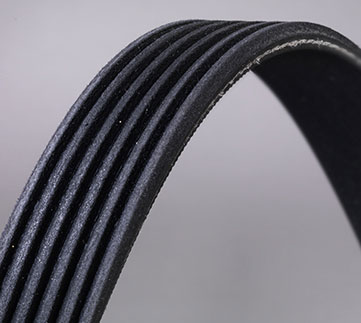 Appearance: The belt surface is flaky, sticky or swollen.
Cause: Oil and grease are a rubber compound’s worst enemies, weakening the compound’s bonds and making the belt soft and spongy. Eventually, such a belt will slip, create heat and fail.
Solution: Eliminate sources of oil, grease or chemical contamination. Replace the belt. Do not use belt sprays. 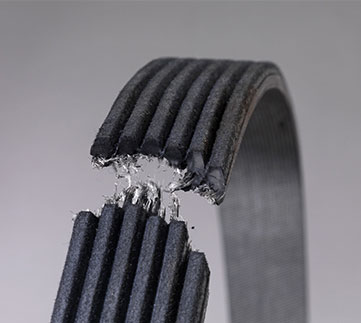 Appearance: The belt is broken.
Cause: A large foreign object between the belt and pulley can cut into the belt and break the tensile cords. Tensile break may occur but go unnoticed when the belt is forced or pried on during installation. Other possible causes may be severe shock loads or a blocked pulley and/or accessory.
Solution: Carefully check all components of the drive for foreign objects or damage. All pulleys in the drive should rotate freely. Replace the belt. Make sure not to force the new belt onto the drive with unsuitable tools. 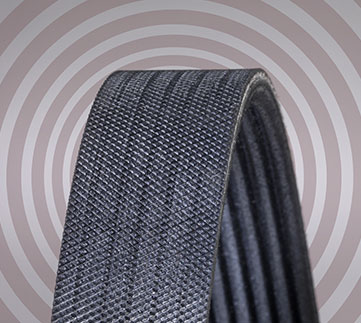 Appearance: Chirping, squealing, tapping, ticking or grinding noise coming from the belt.
Solution: Read our guidelines to correctly diagnose accessory belt drive noise and eliminate the root cause of the problem. 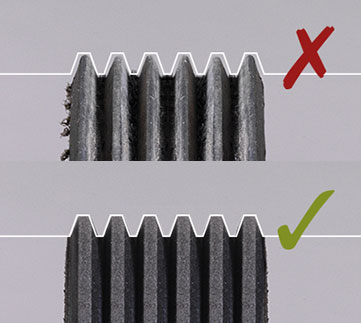 Appearance: Belts made from a material known as chloroprene show traditional signs of wear (cracks, chunk-outs, rib separation, etc). EPDM belts don’t necessarily exhibit these symptoms even though they might be at or near failure as much of the rubber material has worn away.
Cause: EPDM is stronger, is suitable for a wider range of extreme temperatures, and it is more durable. EPDM belts gradually lose rubber material − similar to the way tyres wear out.
Solution: Visual inspection is still a good idea, but don’t just look for the traditional signs of wear. Look closely at the belt ribs and use our PIC Gauge belt wear app to detect an EPDM belt that is near failure.