In this article I will talk about a recent case we diagnosed in MKW Motors, which will prove the mistake. Yes the cheap part will give you more profit at the end of the job “so we think “ but not for long.

Using cheap inferior quality electronic components is like “someone giving you incorrect directions to a place you need to be urgently.

Modern vehicle manufacturers are under huge pressure to meet European emission legislation, which states the level of emissions a vehicle is allowed to emit by law.

These emission levels are set every three to four years, each time they are set they get stricter. When these laws get stricter the vehicle manufacturers must meet the level to legally sell their vehicles with in the EU.

So to meet these strict emission levels the vehicle engine management systems need to react quicker, in the event of an accident the sensors must be fast and accurate for the control unit to analyse an impact and protect the passengers.

So when a fault has been diagnosed and a cheap electronic part has been fitted in the engine management system, it causes a chain reaction effect in the operation. This sensor may look perfect on the outside and look very like the original but this is not the case inside 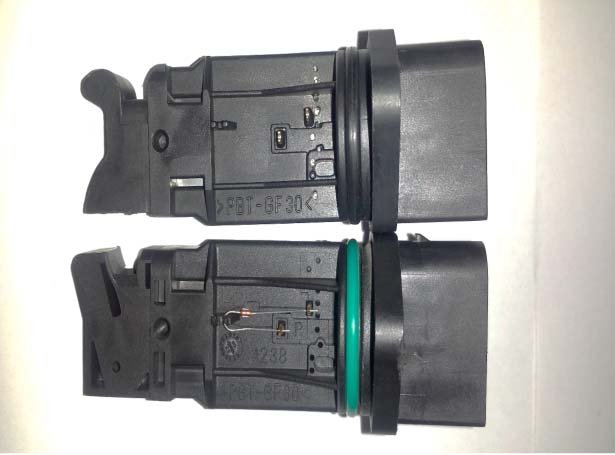 Out side view all looks similar. Don’t judge a book by its cover 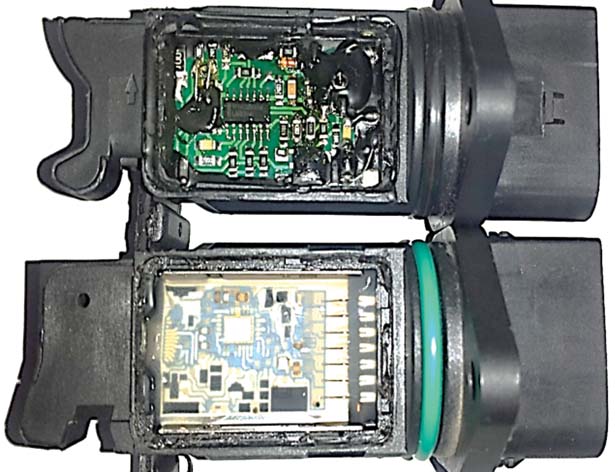 Spot the difference, the top one has cheap nasty electronics that could have be assembled in a garden shed. The lower one as you can see is hi tech micro technology assembled by a robot in a state of the art production facility.

The top part is made of cheap inferior measuring electronics (see photo ). As a result it measures incorrectly or slowly. This incorrect or delayed information means the engine management cannot operate the engine to the required conditions needed within its mapped memory to keep the emissions within the legal limit (incorrect directions).

So the emissions are out but this is not the end of our problem, the management system will now see problems within the system by comparing sensor values against one another. In most cases the engine management system cannot determine the true location of the fault as it expects good quality sensors or actuators are fitted. As a result it will trigger random fault codes after your customer has taken their vehicle back.

The new fault code the customer comes back to you with is not an actual fault, it is a chain reaction fault caused when the engine ECU has received incorrect information. So you will now go fault-finding a fault which is not really there and you will never think that the new   sensor is at fault.

This will lead you in to hours and hours of wasted time, money and parts and the possibility of losing customers. It will also lead to destroying your confidence as a technician if you are not aware of this. In the end you will end up buying the original correct part at full price and this will be at your expense.

An Audi A4 came in to us and it was down on power, heavy black smoke from the exhaust and violent diesel knock and when accelerated there was no fault codes logged.

We plugged in and analysed all the live data, we noticed the EGR valve operating out of the normal range. When we revved the engine we should have seen the EGR valve close immediately to allow full engine power.

The engine management would see EGR gradually closing with speed by the EGR feed back signal produced at the EGR valve. So what do we do replace the EGR valve at a cost €€€€.

We needed to locate the actual cause of the fault, the EGR valve was just opening on instruction of the engine ECU and the ECU was opening the valve because of bad information it was receiving.

Still air test, this test is carried out with the sensor powered on but no air flowing. With the sensor removed out of the air stream but still pluged in . Cap off both ends of the sensor to insure 0 airflow. The reading for this sensor should be 0.98-1.02 volts and it was correct.

Idle voltage, with a diesel engine idling we should see a voltage of 2 volts and this voltage was correct.

Max load voltage , this is an analogue sensor and with the airflow signal on the oscilloscope we should see responsive increase in voltage up to about 4- 4.5 volts. This voltage was good. See the oscilloscope picture below.

So whats the problem

We found no problems with the air flow meter voltages so we decided to look closer at the sensor operation and reaction. We noticed during test 2 the voltage output was good, so we checked the sensor response in more detail and we found the sensor was not reacting quickly enough. This resulted in delayed information or incorrect information, for the given time of engine operation to the ECU about the airflow in to the engine / load of the engine. As a result of this delayed sensor signal change in relation to actual engine change, the ECU was holding the EGR valve open for too long, this caused bad combustion as a result low power, heavy smoke and diesel knock.