The Volkswagen Tiguan is a popular compact crossover vehicle (CUV) for families and also company vehicles with a good choice of engine and specifications available. The first generation launched in 2007 have seen some 2.7million Tiguans produced and with the second generation being launched in 2016 and the ever increasing popularity of the CUV sector the Tiguan should prove popular through your workshop doors.

The REPXPERTs at LuK take a closer look at replacing the clutch, flywheel and CSC on the 2.0TDi 4motion, CBBB engine code and offer some handy hints which should prove useful to any independent garage looking to undertake the six hour repair on this vehicle.

The replacement of the clutch was done using a two post ramp, two transmission jacks and an engine bridge tool. The only special tool requirement needed is a universal alignment tool for the clutch driven plate.

The repair starts from under the bonnet. 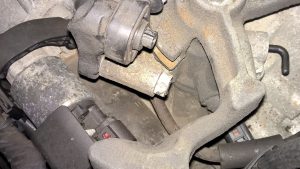 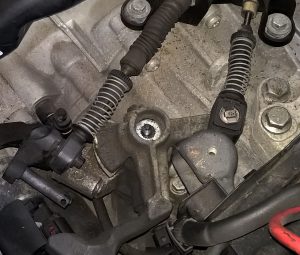 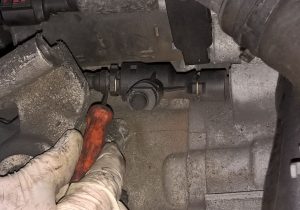 Remove the white plastic locking clip (Fig1) that holds in place the reverse gear lever and cable and detach from position. Remove the locking nut from the gear selector cable and remove this from its keyway stub (Fig2). Unbolt the selector cable mount and stow safely away from the working area.

Remove the retaining clip holding the hydraulic line into the clutch master cylinder (Fig3) and disconnect the line and blank off. In our case we held the line vertically and blanked off using a plastic cap. You could also clamp the line with a hose clamp and then disconnect the pipe. 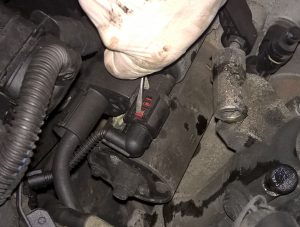 Stow the hydraulic line safely. Do not operate the clutch pedal.

Remove the top two bell housing bolts and remove the upper starter motor bolt. Disconnect the electrical connector from the starter motor by pulling the red tab back slightly (Fig4) to unlock the connector allowing it to ease off from its position. Stow the cable safely. Unclip the plastic cover over the main power cable to the starter and unbolt the cable and stow.

Disconnect the reverse light switch and remove the earth cable from the gearbox. Remove the two bolts that hold a plastic support bracket for the wiring loom and the starter motor in place and remove the both parts.

Remove both driveshaft bolts and remove the bolts on both sides from the wishbones and disconnect them from the stub axles. In our case we decided not to remove the prop shaft, exhaust and transfer box, but to remove both drive shafts and sub frame as this gives plenty of room to disconnect the gearbox from the engine. The O/S drive shaft should be unbolted from the flange on the transfer box. 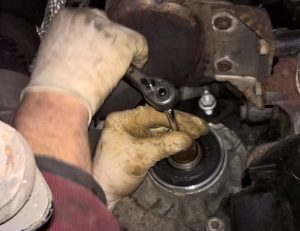 Unbolt the steering rack and anti roll bar and disconnect the wiring harness from the sub frame. Remove the six bolts securing the sub frame in place and using a transmission jack for support carefully lower the sub frame. Remember to remove the 6mm allen key bolt through the transfer box (Fig6) as you will not separate the gearbox from the engine (Fig6).

With the clutch removed, check the Dual Mass Flywheel (DMF) for signs of heat stress and evidence of grease loss. The DMF should also be tested for freeplay and rock between the primary and secondary masses, LuK tool number 400 0080 10 is specifically designed for this purpose on all LuK manufactured DMF’s. Full instructions and tolerance data for all LuK DMFs are contained on a CD which comes with this special tool.

Clean the first motion shaft splines and any debris from the bell housing (especially important when a release bearing has failed).  It`s important to ensure that the release bearing is always replaced if the clutch and/or DMF are worn out. Put a small dab of high melting point grease (not a copper based product) on the first motion shaft splines and make sure the new driven plate slides freely back and forth. This not only spreads the grease evenly but also makes sure you have the correct kit. Wipe any excess grease off the shaft and driven plate hub. Using a universal alignment tool and checking the driven plate is the correct way round (note “Getriebe Seite” is German for “Gearbox Side”) the clutch can be bolted to the flywheel evenly and sequentially.

Before fitting the gearbox make sure the locating dowels are in place and not damaged.

Refit any that have become dislodged and refit the gearbox. Make sure the gearbox bell housing bolts are secured before lowering the jack. Refitting is the reverse of the removal.

All information is supported by LuK’s experienced and highly trained technical team, available on 0872 737 0037 –  Additionally check out the latest in online support www.REPXPERT.co.uk 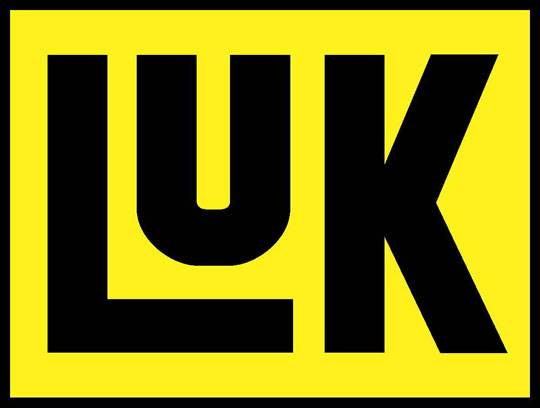