Design
The NOx sender consists of two chambers, two pump cells, several electrodes and a heater. The sensor element consists of zirconium dioxide. This substance has the characteristic that, when electrical voltage is applied, the negative oxygen ions migrate from the negative electrode to the positive electrode. 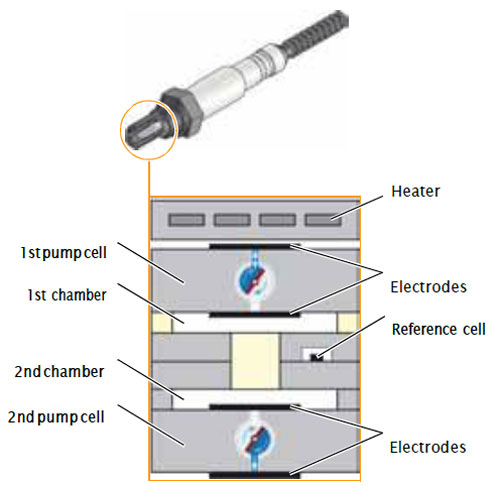 Function of the NOx sender
The manner in which the NOx sender functions is based on oxygen measurement and can be determined from a broadband lambda probe. 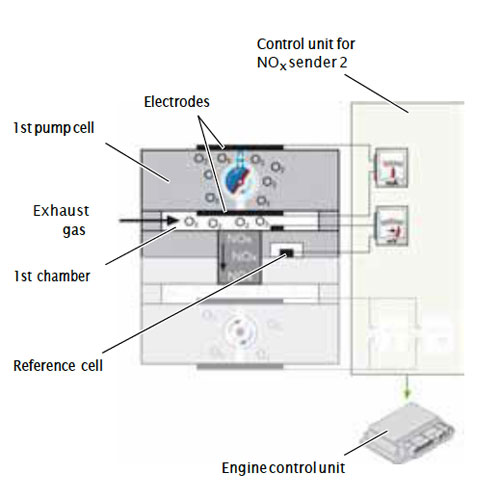 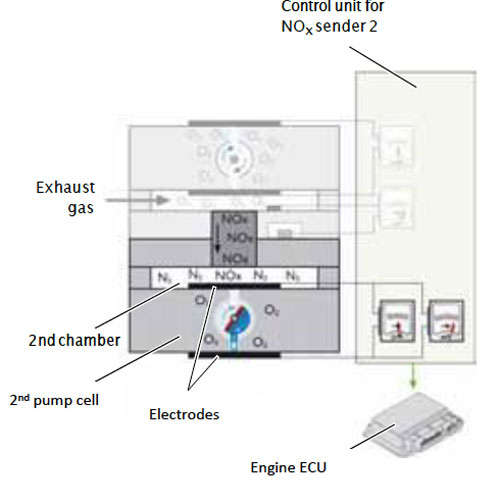 Effects of signal failure
In the event of signal failure, a fault is entered in the engine control unit’s fault memory; the exhaust emissions warning lamp (MIL) and the AdBlue® warning display for system faults in the dash panel insert display are switched on.

The NOx sender is only switched on, together with its heater, when it is ensured that no condensation is able to destroy the sensor ceramic. To achieve this, the temperature in the exhaust system must be so high that the dew point temperature of water is exceeded and that no further condensed water can be found in the sensor.

AdBlue® reducing agent
The ammonia required to reduce the nitrogen oxides is not used in its pure form, but in the form of a urea solution. In its pure form, ammonia acts to irritate the skin and mucous membranes, and additionally has a penetrating odour. A fluid, which is universally referred to under its brand name, AdBlue®, throughout the automotive industry, is used as the reducing agent for the SCR system.
AdBlue® is a very pure, transparent 32.5 % solution of urea in water. It is manufactured synthetically. 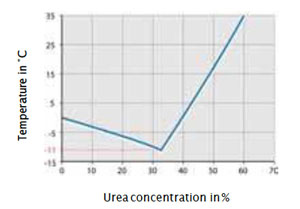 Characteristics of AdBlue®
● AdBlue® freezes at temperatures below –11 °C.
● AdBlue® breaks down at high temperatures (approx. 70 °C – 80 °C) . This results in the formation of ammonia and therefore possible odour pollution.
● Contamination with foreign substances and bacteria may render AdBlue® unusable.
● Leaked and crystallised urea causes white flecks. These flecks must be removed with water and a brush (as soon as possible).
● AdBlue® has a high creep capability. Electrical components and connectors must be protected against AdBlue® penetration.

Notes on handling AdBlue®:
● Only use AdBlue® from original containers according to the manufacturer’s approved standard.
● Drained AdBlue® must not be reused in order to avoid contamination.
● The reducing agent tank must only be filled using the containers and adapters approved by the manufacturer.
● The reducing agent can irritate the skin, eyes and respiratory organs. If this fluid comes into contact with skin, it should be immediately washed off with plenty of water. If necessary, seek medical advice. 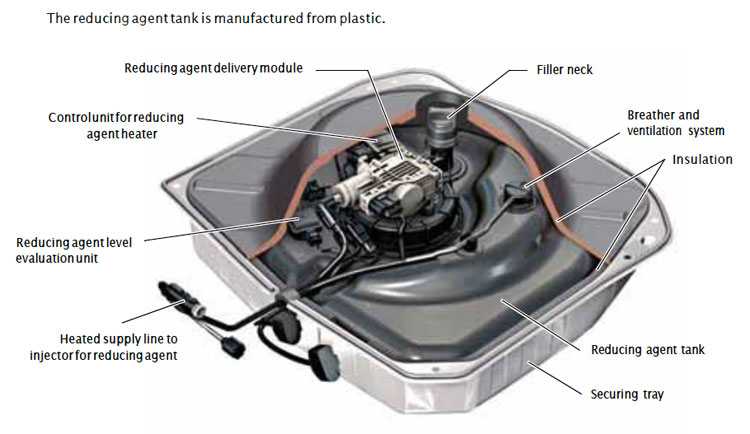 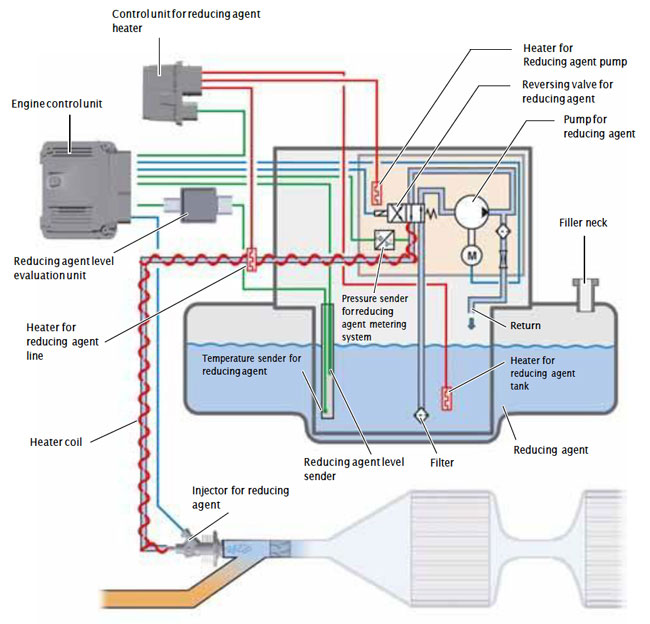 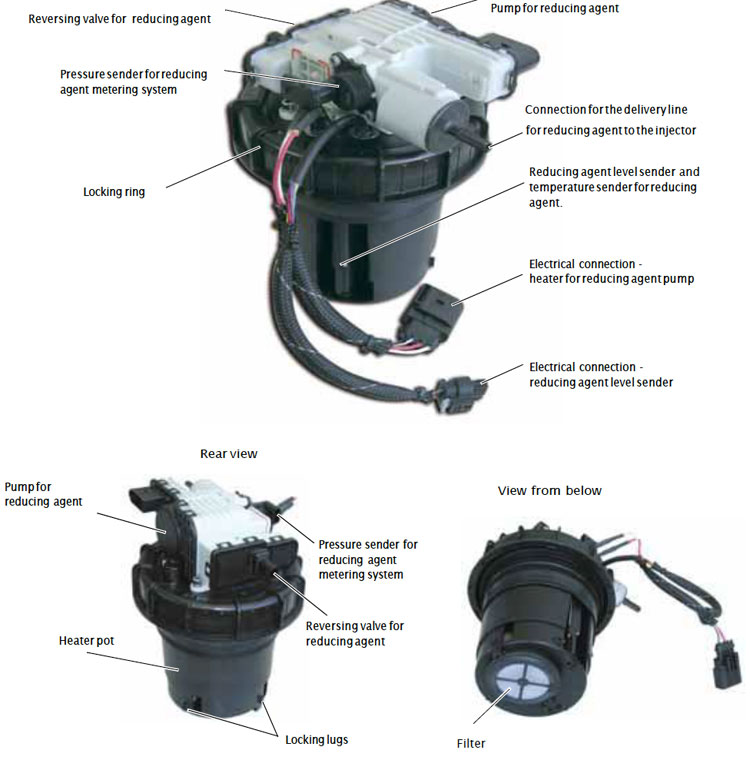 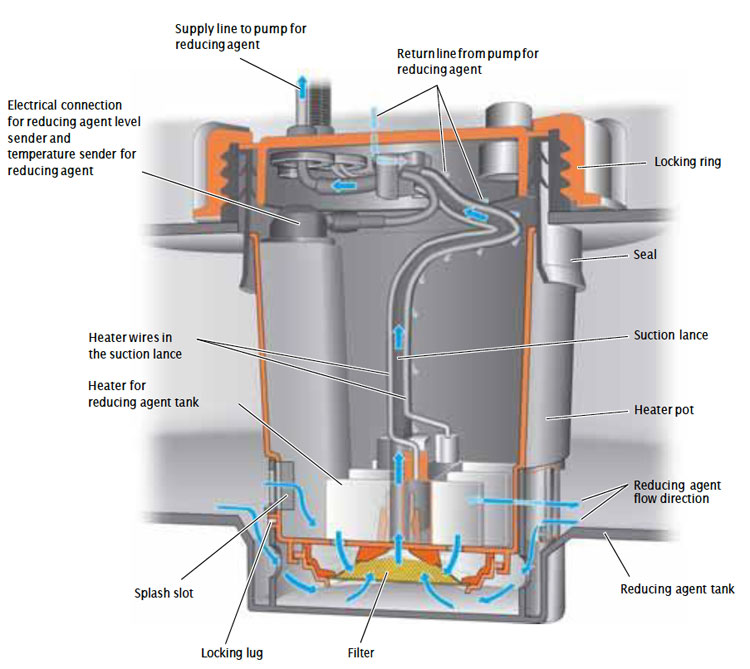 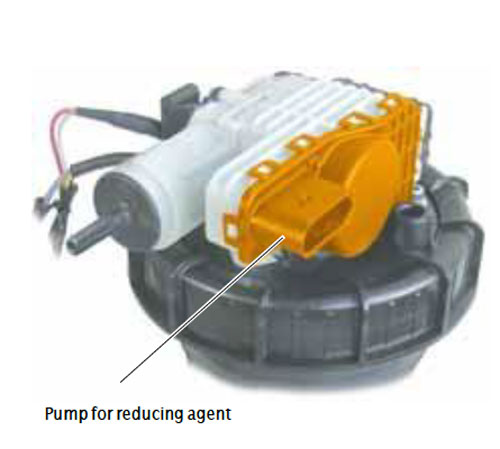 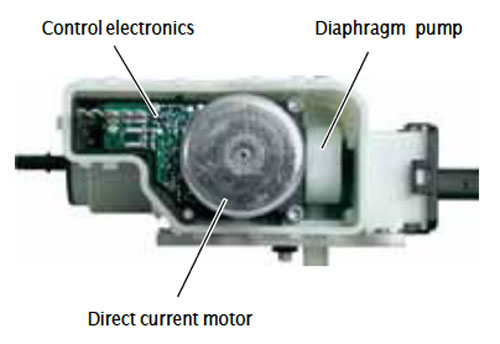 How it works
The engine control unit actuates the motor with a pulse-width-modulated signal. The motor drives the diaphragm pump via a connecting rod. When the SCR system is active, the reducing agent is sucked out of the tank via the diaphragm pump and is pumped into the delivery line.

Effects in the event of failure
If the pump for reducing agent fails, the SCR system is unable to function. The exhaust emissions warning lamp (MIL) and the AdBlue® warning display for system faults in the dash panel insert display are switched on. 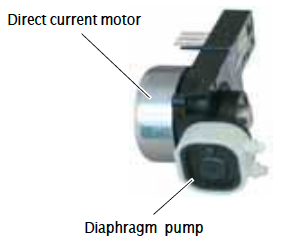 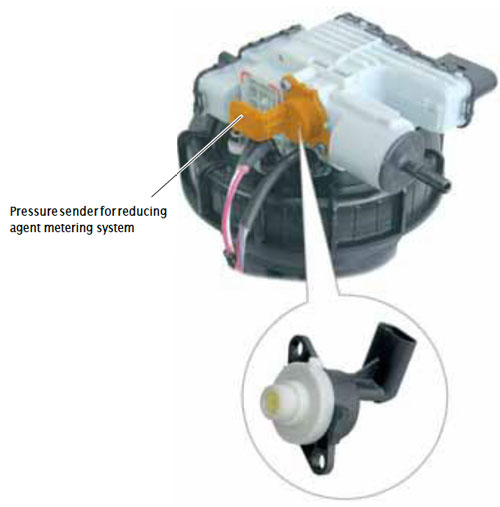 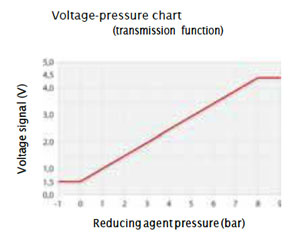