The reduction of pollutant emissions is an important challenge in automotive technology. In the first of three articles, MKW Motors explains Selective Catalytic Reduction.

Selective Catalytic Reduction
The reduction of pollutant emissions is an important challenge in automotive techno|ogy.
The SCR system is a new exhaust gas aftertreatment system. It is used to reduce the nitrogen oxides contained in exhaust gas. The abbreviation SCR stands for Selective Catalytic Reduction.
With this technology, the chemical reaction of reduction is selective. This means that, out of all exhaust gas, only the nitrogen oxides are speciﬁcally reduced.

In the reduction catalytic converter, the nitrogen oxides (NOX) contained in the exhaust gas are converted into nitrogen (N2) and water (H20). To achieve this, a reducing agent is continuously injected into the exhaust gas flow upstream of the reduction catalytic converter. The reducing agent is contained in a separate, additional tank.
In the automotive industry, SCR technology has already been in use for some time in commercial vehicles and buses.

Emissions standards
The table below shows the extreme reduction required for NOx and PM (particle matter) from Euro 4 to Euro 6. Any car sold from January 2015 must meet Euro 6 levels.

They occur during combustion in the engine as a result of high pressure, high temperatures and surplus oxygen. 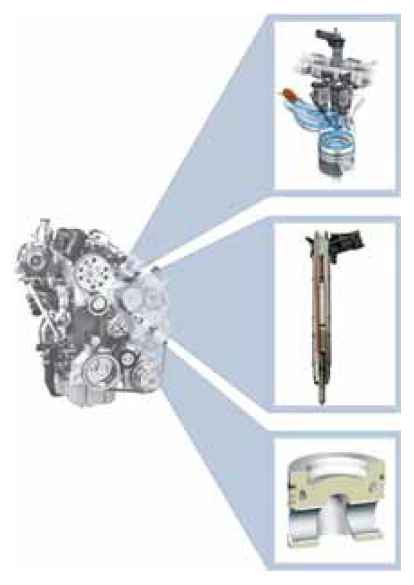 Emission reduction can be achieved via measures within the engine. Effective optimisation of combustion ensures that pollutants do not occur in the ﬁrst place.

The measures within the engine include: 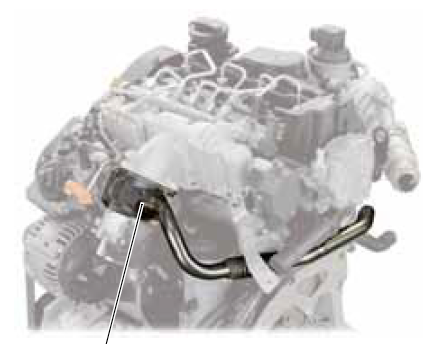 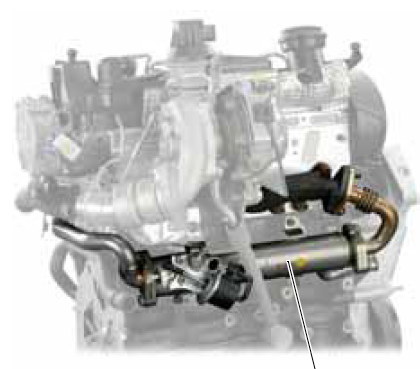 In order to reduce the nitrogen oxides even more effectively during exhaust gas recirculation, the recirculated exhaust gases are passed through a cooler when the engine has reached its operating temperature.

This additionally reduces the combustion temperature and enables an increased volume of exhaust gases to be recirculated.

Operating principle of the SCR system

In the reduction catalytic converters, the ammonia (NH3) reacts with the nitrogen oxides (NOX) to form nitrogen (N2) and water (H20). The SCR system’s efﬁciency is registered by NOX sender.

Under the following conditions, injection of the reducing agent is interrupted by the engine control unit:

The reduction catalytic converter’s coating consists of copper zeolith. This accelerates the speed of the nitrogen oxide reduction process.

The ammonia(NH3) required to reducethe nitrogenoxides is formed therefromthe reducing agen (urea solution). This is carried out viaathermolysis and hydrolysis reaction on the part of the injected reducing agent.

When the reducing agent is injected into the hot exhaust gas ﬂow, the water initially evaporates.

During thermolysis, the reducing agent (urea solution) is broken down into ammonia and isocyanic acid.

This is followed by hydrolysis, in which the isocyanic acid reacts with the water contained in the exhaust gas. This leads to the creation of an additional ammonia and carbon dioxide molecule.

Thermolysis = thermolysis is a chemical reaction in which an initial substance is broken down into several products by means of heating.

Hydrolysis = hydrolysis is the cleavage of a chemical compound via its reaction with water. 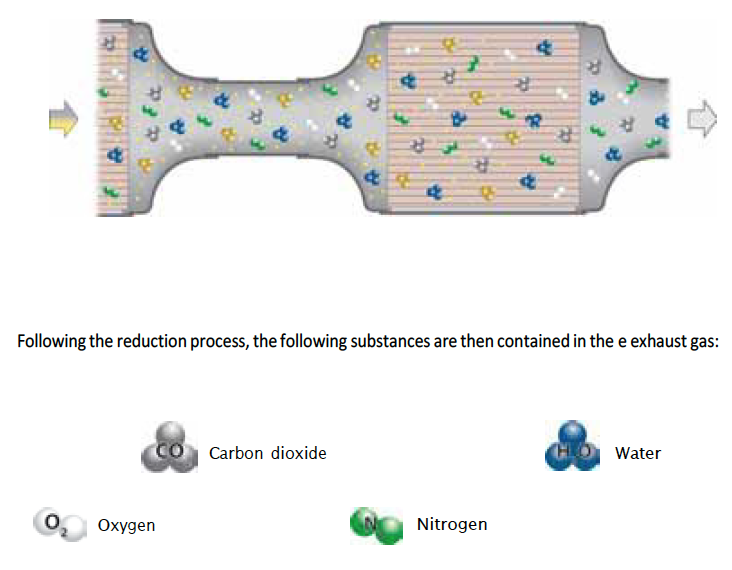