Home » Technical Articles, Timing Belt » Timing belt with or without dimple? That’s not...

Timing belt with or without dimple? That’s not the question!

For certain Fiat Group, VAG and PSA engines, the OE timing belt may have a ‘dimple’ or groove in the teeth, but the OE-quality aftermarket Gates replacement sometimes does not. However, this does not mean that the aftermarket belt is not a suitable replacement part because the dimple is not there. In fact, Gates originally held the patents on the OE tooth profiles and adding the ‘dimple’ along the top of the tooth was a way for the competition to gain new business in the Aftermarket without infringing the profile patents.

Some mechanics mistakenly take an OE curvilinear-toothed belt (round teeth) with ‘dimple’ for a trapezoidal-toothed belt (square teeth), making them wrongfully question the validity of the replacement belt with round teeth. Nevertheless, the only difference between the tooth profiles is the ‘dimple’ and with or without it, both belts in fact have round teeth. 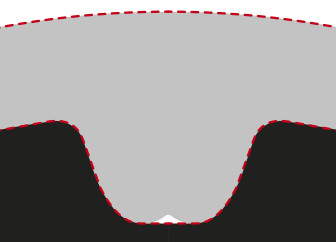 Belts with and without ‘dimple’: round belt profiles

DIFFERENT IN APPEARANCE, NOT PERFORMANCE

The load on curvilinear-toothed belts is applied at the base of the teeth, clearly establishing that a ‘dimple’ in the tooth does not affect the performance of the belt since it’s located in an area where minimal stress occurs. In theory, the dimple tooth is quieter than the non-dimple tooth because the air in the grooves of the pulleys can escape better via the dimple. However, the driver of the car will not pick up the difference as the belt noise is completely drown out by the sound of the combustion engine. In conclusion, car mechanics can safely mount the aftermarket belt with round teeth, even if they have just removed a timing belt with a ‘dimple’. 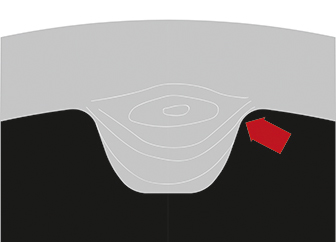 Load distribution clearly located at the base of the belt profile 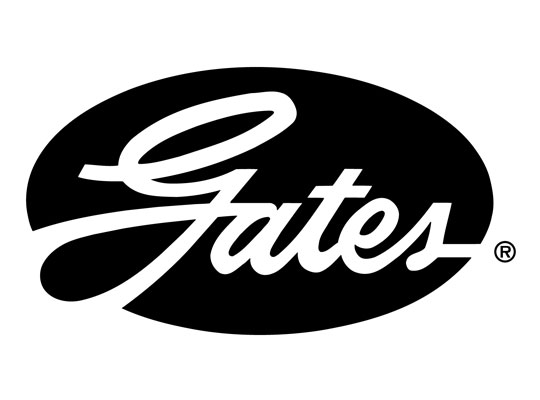